Little Winnick is a family owned camping & caravanning park, the large touring field is spacious and flat located on the banks of the River Winnick. The Park is a real sun trap with pitches enjoying sunshine from sunrise to dusk.

We have a selection of:

All of our pitches are a minimum of 8 x 8 metres.  We ask that everything you pitch, including awnings, gazebo or pup tent and car are sited within this area.  Please note if you have a large tent, especially the larger Airbeam tents, with extra awnings we may not be able to accommodate your tents.  When pitching, everything including your guy robes must be within your pitch boundary.  Please speak to us when booking.  Pitches prices are based on 2 people, extra people will be charged accordingly.  We allow a maximum of 6 people per pitch.

Electric hook ups are supplied behind the marked out pitches, please ensure you bring your own electric cable to connect into the electric. 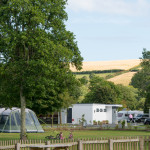 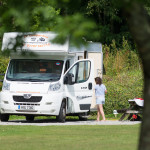 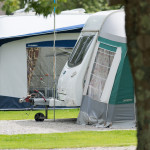 Little Winnick Touring Park has been a holiday location for decades, with locals fondly recounting church camps taking place in tour fields.  Formerly a Haven site and once known as Penhaven the Park was taken over by the Clemo Family in 2013.  The family, true locals, have been in the holiday industry for four generations.  Grandad Pooley was ahead of his time; over 60 years ago turning his farm into what is still a successful holiday park on the outskirts of Sticker, just a few miles from Little Winnick.

Having lived and worked in Cambridgeshire Heidi & Richard moved back down to Richard’s home county and in 2013 invested in Little Winnick Touring Park, having driven past throughout the years watching it slowly become more and more run down.  At the same time Heidi & Richard’s family continued to grow, and they now have three daughters who are often found around Little Winnick assisting in one way or another.

Since taking over the park Heidi and Richard have lovingly restored and revitalised all aspects of Little Winnick, the crowning glory came with the rebuilding and remodelling of the amenities on the park.  With guests commenting that the facilities are the ‘ritz of the camping world’ and the accolade of achieving Gold in Loo of the Year followed by Platinum in Loo of the Year, the family are rightly proud of their tireless work to deliver an immaculate and cared for park for guests to enjoy.  This was followed shortly by being award Gold in the David Bellamy Conservation Awards and Bronze in the Cornwall Tourism Award for Holiday Park of the year.

We have worked hard over the years to establish Little Winnick as a traditional family friendly holiday park.  We like to think it is the kind of place we would like to holiday with our three daughters.  Many guests now return year after year for the relaxed, quiet atmosphere where friendships are made and memories are created. We warmly welcome you to our pride and joy, and hope you will enjoy the park as much as we do. 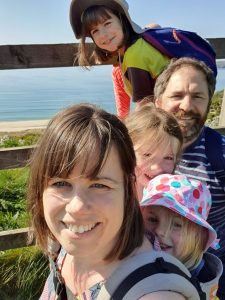 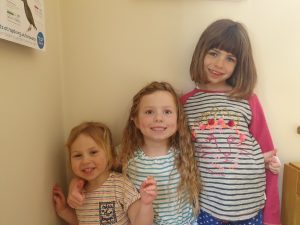