This is an important notice to any little people coming to stay – the tooth fairy does visit Little Winnick, no matter where you are from, they will find you here.  This week one of our younger guests had a tooth fall out whilst she was in her caravan.  Her Dad told us she was a bit concerned that the Tooth Fairy would not know where to visit, but thankfully the Fairy had visited reception and left a letter for her, along with a small token for the tooth.  The young guest very kindly brought the tooth in wrapped in kitchen roll as proof it had fallen out!!  Whilst we are on the subject Father Christmas also watches over everyone here too and makes sure everyone is being nice…you better be on your best behavior.

To accompany the fairies that float around we also have a dragon on the park this week – Timothy the Bearded Dragon.  He is a lovely chap (well confined within his caravan, don’t worry he will not escape), I would not describe him as cuddly but I did have a little stroke of him.  He had a prickly demeanor about him!  He is in one of my favourite caravans currently on the park – she is called Daisy, is a vintage caravan and has been restored brilliantly by her owners. 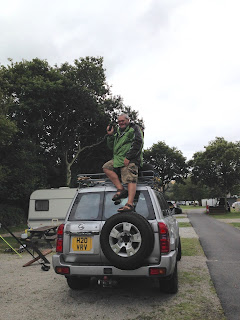 This week I came across a guest who claimed he was working in his ‘office’ aka the top of his car, as that is where he could get phone signal!  Phone signal is pretty patchy here, as we are nestled in a valley.  There are ‘spots’ which are better than others to get signal but come expecting none and then you will not be disappointed if you get some.  Most guests leave saying it has been wonderful escaping from the technological world we live in.  That said we do offer WiFi across the park.  You can buy vouchers from us in reception or directly from Club WiFi.  Wifi costs:

The next few days see’s lots of lovely events locally:

7 August – Drop in Yoga on the beach